For example, if Txn A holds a write lock (an exclusive lock) on object 002, then if Txn B tries to obtain a read or write lock on that object, the thread of control in which Txn B is running is blocked: 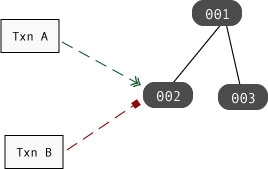 However, if Txn A only holds a read lock (a shared lock) on object 002, then only those handles that attempt to obtain a write lock on that object will block.

Multi-threaded and multi-process applications typically perform better than simple single-threaded applications because the application can perform one part of its workload (updating an XML document, for example) while it is waiting for some other lengthy operation to complete (performing disk or network I/O, for example). This performance improvement is particularly noticeable if you use hardware that offers multiple CPUs, because the threads and processes can run simultaneously.

That said, concurrent applications can see reduced workload throughput if their threads of control are seeing a large amount of lock contention. That is, if threads are blocking on lock requests, then that represents a performance penalty for your application.

Consider once again the previous diagram of a blocked write lock request. In that diagram, Txn C cannot obtain its requested write lock because Txn A and Txn B are both already holding read locks on the requested object. In this case, the thread in which Txn C is running will pause until such a time as Txn C either obtains its write lock, or the operation that is requesting the lock is abandoned. The fact that Txn C's thread has temporarily halted all forward progress represents a performance penalty for your application.

Moreover, any read locks that are requested while Txn C is waiting for its write lock will also block until such a time as Txn C has obtained and subsequently released its write lock.

As you are designing your application, try to do the following in order to reduce lock contention:

Reduce the length of time your application holds locks. Shorter lived transactions will result in shorter lock lifetimes, which will in turn help to reduce lock contention. In addition, by default transactional cursors hold read locks until such a time as the transaction is completed. For this reason, try to minimize the time you keep transactional cursors opened, or reduce your isolation levels – see below. If possible, access heavily accessed (read or write) items toward the end of the transaction. This reduces the amount of time that a heavily used page is locked by the transaction.

Consider your data access patterns.Depending on the nature of your application, this may be something that you can not do anything about. However, if it is possible to create your threads such that they operate only on non-overlapping portions of your database, then you can reduce lock contention because your threads will rarely (if ever) block on one another's locks.

It is possible to configure Figaro's transactions so that they never wait on blocked lock requests. Instead, if they are blocked on a lock request, they will notify the application of a deadlock (see the next section).